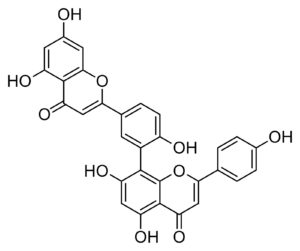 Origin: Extracted from many different plants including Ginkgo Biloba and St John’s Wort.

Overview: Amentoflavone is a polyphenolic compound that  increases the production of testosterone by inducing the release of GnRH at the hypothalamus. Amentoflavone is a known PDE inhibitor, making its vaso-dilator abilities very potent. It also supports enhanced muscle contractions, by increasing calcium release within the muscle cell. Amentoflavone also helps to enhance mood, improving alertness and wakefulness by modulating GABA receptor activity.

Common Dosage: The recommended dosage for Amentoflavone depends on several factors such as the user’s age, health, and several other conditions.