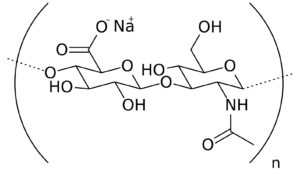 Origin: Formerly derived from rooster combs but is now extracted from plant sources such as soybean and corn through a fermentation process involving bacteria.

Overview: Sodium Hyaluronate is the sodium salt of hyaluronic acid. Hyaluronic acid is found naturally in the fluid that bathes joints, in the vitreous humor of the eye and in the skin. Sodium hyluronate is the main ingredient in Restylane, an injectable filler used to treat loss of facial volume and wrinkles. It has other medical applications as well.

Doctors sometimes use injections of sodium hyaluronate to treat knee pain due to arthritis. Sodium hyaluronate has moisturizing benefits when applied topically to skin tissue. It’s non-irritating to skin and is usually well tolerated even by people with sensitive skin.

Common Dosage: 10 mg to 20 mg depending on the intended usage