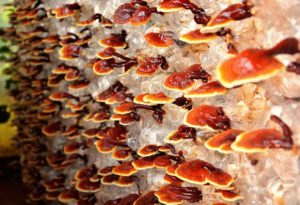 Origin: Grows at the base and tree stumps of deciduous trees

Overview: Reishi mushroom extract is a compound derived from a polypore mushroom belonging to the genus Ganoderma. Its red-varnished, kidney-shaped cap gives it a distinct appearance. When fresh, the lingzhi is soft, cork-like, and flat.

It contains a group of triterpenes called ganoderic acids, which have a molecular structure similar to that of steroid hormones. It also contains other compounds often found in fungal materials, including polysaccharides (such as beta-glucan), coumarin, mannitol, and alkaloids. Sterols isolated from the mushroom include ganoderol, ganoderenic acid, ganoderiol, ganodermanontriol, lucidadiol, and ganodermadiol.