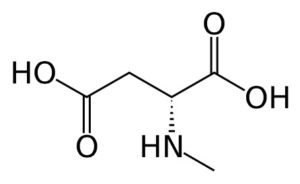 Overview: N-Methyl-D-aspartic Acid is one of the 20 common amino acids that are used by the body to construct proteins and is considered to be non-essential since it can be made from oxaloacetate, an intermediate of the tricarboxylic acid cycle.

This compound is believed to have natural testosterone boosting properties which leads to increased muscle mass and strength in resistance-trained males when compared to placebo.