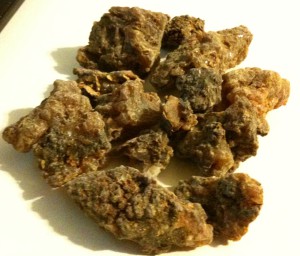 Myrrh is an ingredient most commonly known as one of the gifts that was brought to from the three wise men at the birth of Jesus Christ. Myrrh is an ingredient that was known to be very important in biblical times as it was used as a spice. Myrrh oil is still commonly used today as a remedy for a variety of ailments. Myrrh has become increasingly popular due to its potent antioxidant activity and potential as a cancer treatment. It has also been shown to be effective in fighting certain types of parasitic infections that may form within the human body.

Myrrh is a sappy like substance that comes from a tree called Commiphora myrrha. This tree is most commonly found in Africa or the Middle East Region of the world. The myrrh tree is distinctive due to its white flowers and knotted conditions where it grows. To bring out the sappy like substance of Myrrh the tree that it comes from must be cut into as the sappy like substance is found on the inside of the tree. Once the resin has dried it begins to look like tears all along the tree trunk. Following this the resin is then collected and the essential oil is made from the sap via steam distillation.

Myrrh extract has a sweet or sometimes bitter smell. The word myrrh comes from the Arabic word “murr” meaning bitter. The sappy like substance is a yellow or orange color that contains a good amount of consistency to it. This is most commonly used as a base for perfume and other fragrances. Two primary active compounds are found in myrrh which is called terpenoids as well as sesquiterpenes. Both of these parts have anti-inflammatory and antioxidant effects that can promote healing within the human body. Sesquiterpenes also have an effect on our emotional center which help us remain calm and balanced. Myrrh has been used for thousands of years in traditional healing therapies to help the sick or wounded. Many countries around the world use Myrrh as a medicine or herb remedy that can promote healing within the human body.

The health benefits of myrrh oil can be attributed to its wide array of powerful properties. Some of the benefits of Myrrh or Myrrh Extract are that it is antimicrobial, astringent, expectorant, anti-fungal, stimulant, carminative, antiseptic, immune booster, assists with circulatory issues, anti-inflammatory properties, as well as stomach issues. Another benefit is the effect on skin and hair health as Myrrh can help maintain healthy skin. Studies have also shown that someone who is hypothyroid can benefit greatly from using Myrrh because it helps reduce stress and promote relaxation. Myrrh has proved to have many benefits over the thousand years that it has been studied.

Here at NutraCap Labs we have Myrrh Extract as one of our premium ingredients. Let us walk you through how to use Myrrh Extract in your next product for your supplementation line. To get the process started visit us online at www.nutracapusa.com