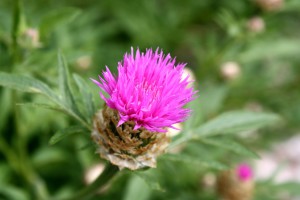 Milk Thistle Extract has proven to be very unique in its ability to protect the liver and has no equivalent in the pharmaceutical drug world to date. This ingredient has been so dramatically effective that the treatment has never been disputed, even by the traditional medical community. Milk Thistle Extract is an annual or biennial plant of the Asteraceae family. Milk thistle acts in a similar fashion to detoxify other synthetic chemicals that find their way or are put into our bodies. Some of these chemicals that range from the likes of acetaminophen, external hormones, as well as alcohol, heavy metals, and radiation. Milk thistle Extract was approved in 1986 as a treatment for liver disease and it is widely used to treat alcoholic hepatitis, alcoholic fatty liver, cirrhosis, liver poisoning and viral hepatitis. Milk Thistle extract has also been shown to protect the liver against medications such as acetaminophen, a non-aspirin over the counter pain relievers.

The most notable ingredient, or liver-protecting compound in milk thistle is known as silymarin. This ingredient actually consists of a group of compounds called flavonolignans, helps repair liver cells damaged by alcohol and other toxic substances by stimulating things such as protein synthesis. This process is done by changing the outside layer of liver cells so that it can prevent certain toxins from getting inside the liver itself. Silymarin also seems to encourage as well as regenerate liver cell growth. This ingredient can reduce inflammation and has potent antioxidant effects that help the liver repair at a more rapid rate than it would on its own. Antioxidants are used though out the body to protect cells from damage caused by a chemical process called oxidation. Milk Thistle Extract is not actually standardized to an exact amount because it is derived from natural dried plants. Milk Thistle naturally contains about Silymarin which has herb benefits that are used to treat symptoms of adrenal disorders and inflammatory bowel syndrome, and is used to treat psoriasis. Milk thistle also has some estrogen-like effects that may stimulate the flow of breast milk in women who are breast-feeding infants. It may also be used to start late menstrual periods in women who have irregular menstrual cycles or no menstrual cycle at all.

There have also been animal studies as well as one small study in humans showing that milk thistle produced modest reductions in total cholesterol. This herb is a must for cleansing and for anyone with any sort of liver dysfunction or exposure to toxins. A European standardized extract of milk thistle was used in most of the trials.. Those with the mildest form of liver disease appeared to improve the most. Milk thistle was less effective for those with severe liver disease such as cirrhosis. Cirrhosis is characterized by scarring and permanent, non-reversible damage to the liver. Once the liver has reached this stage of liver damage it is often very hard to bring it back and most likely a transplant would be needed or death could result.

Here at NutraCap Labs we carry Milk Thistle as one of our ingredients. Visit our website www.nutracapusa.com to get your process started today with your product including this great ingredient.